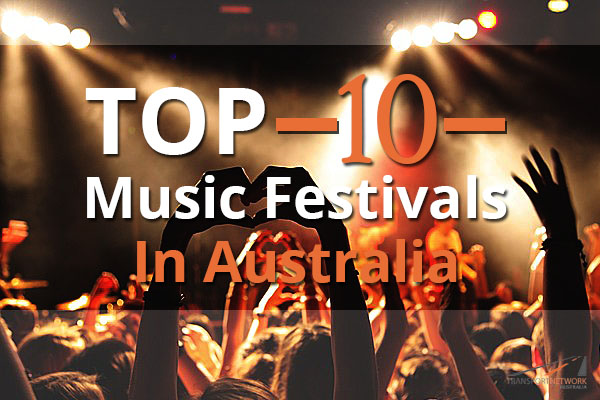 When you are in a fun country like Australia, it’s common that many people travel to different parts of the country for big music festivals, in order to satisfy the craving for killer tunes. Right from the hard-core EDM fans to roots and blues, the music festivals in the Koala Land cater to all sorts of tastes. While a few festivals have hit the roads, others have stuck their native ground for years. Enlisted below are top 10 music festivals in the country – why not book luxury bus charter and attend one today?

Generally held in the last week of May, The Big Pineapple Music Festival is a one-day event taking place on the scenic Sunshine Coast, featuring an extensive array of emerging Australian artists. Set against the background of the fruitiest landmark in the entire Sunshine Coast, the festival-goers are sure to be amazed. Some massive growth is expected for the coming years of the event, since this comparatively new festival moved from the highway to a more accommodating space.

6 days and 6 nights of musical extravaganza, the Woodford Folk Festival is something different from the convention. It will be a mash up of children’s entertainment, social dialogue, comedy, street theatre, dance and music. This magical event takes place towards the north of Brisbane on the Sunshine Coast during the Christmas break. The 500-acre parkland of Woodfordia will turn into a festive mood over the entire week, and if you are looking for something different, take a trip through Woodford for a completely whirlwind experience.

All the Metallica lovers out there, who enjoy their music heavy and loud, this festival is specially for you. Taking place in major cities including Brisbane, Sydney, Melbourne and Adelaide, the extensive line of concerts go down each summer near the end of January.  To accommodate a rocking line-up, the festival has compressed to a 2-day format. Yesteryears have witnessed the likes of Marilyn Manson, The Smashing Pumpkins, Slipknot and Nine Inch Nails. Book your tickets now, for the next exciting season!

Regarded as the biggest ode of Australia to the expressive music stylings, the Melbourne Jazz Festival will be full of Funk, blues and Jazz. Held in Melbourne every year in the months of April and May, the 11-day event showcases emerging talents performing in the art galleries, clubs and concert halls of the city. The festival is ideal for those who fascinate the idea of enjoying a peaceful ambiance with a glass of wine, rather than struggling to stand in an overcrowded concert.

Taking place in the Byron Bay of the New South Wales, the Bluefest is a premier blues and roots festival in Australia held in the long Easter weekend. This high-octane 5-day event pays tribute to all things blue with a good measure of grassroots and folk music thrown in good amounts. Drawing a relatively mature crowd, all the entertainment takes place on the Tyagarah Tea Tree Farm. Come along with your loved ones and enjoy an extended weekend in the lap of symphony.

While high-profile cities like Brisbane, Melbourne and Sydney attract a good amount of visitors for a number of musical shows held throughout the year, the regional areas are not far behind as well. Groovin the Moo is a perfect example of this. Held in the months of April and May each year, this travelling festival rolls through some of the smaller cities like Canberra, Maitlandm Bendigo and Townsville. Ever since its inception in 2005, it has been a sold-out show, thanks to their impressive line-ups.

You would certainly want to check out the Listen Out Music Festival, if trance, electro and dance tickles your fancy.  Replacing the Parklife Music festival in 2014, this boutique electronic and music dance festival will hit the centre-stage in different locations including Brisbane, Sydney, Perth and Melbourne.  The event as a whole is more ritzy and upscale, in comparison to the general drug-fueled dance parties of other festivals.

The Falls Music and Arts Festival

New Year’s celebrations are wild and extravagant in any part of the continent, while this festival adds a musical taste to it. With some of the biggest names in the Australian music industry performing, the Falls Festival is held annually in 3 locations across the country. The course will start with Marion Bay Tasmania and Lorne Victoria, with Byron New South Wales being the latest addition in the recent years, so as to make space for the east coasters as well. This auspicious occasion is popular for getting some big name international acts from different corners of the globe.

Splendour in the Grass

The elegant town of Byron Bay is undeniably a fitting home to a wide range of musical festivals in Australia. Splendour in the Grass is a premier wintertime festival attracting over 30,000 people annually. It draws national attention by virtue of its high-octane international music line-up, with lots to look out for. Initially, it started as a one-day event, which quickly turned into a weekend of beating the winter blues in a striking music spectacle. Put on your jackets, grab some drinks and set yourself for the Bay, along with your friends and family for a long holiday weekend.

With its early days in the year 2004, the St. Jerome’s Laneway Festival has emerged to be one of the most vibrant musical celebration in the world. The entire concept started out in the hidden laneways of the city, and today it showcases some of the best emerging musical talents in the country than any other festival.  Owing to its huge popularity, it has also gone international with Detroit, Singapore and Auckland hosting their own Laneway Festivals. Australian cities conducting the festival include Sydney, Fremantle, Brisbane and Adelaide.

Take a lavish ride to these respective festival destinations by using premier bus charter. The best part about it is the fact that you can travel together in a group, without compromising the comfort you are used to!