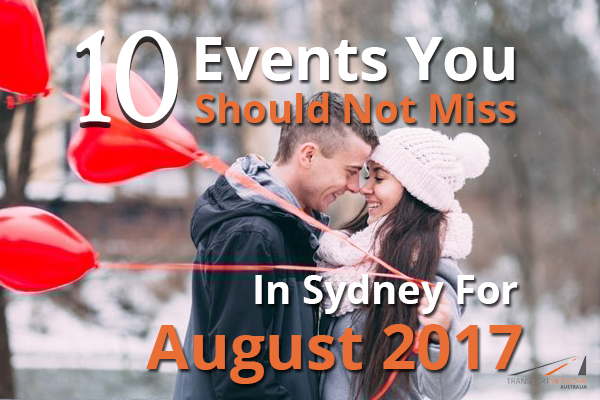 10 Events You Should Not Miss In Sydney For August 2017

One of the most happening cities in the world, Sydney is always loaded with a variety of events throughout the calendar year. Enlisted below are some of the most interesting events happening in August 2017, and you can easily access these event destinations by choosing coach hire in Sydney.

Creating a balance between wearable and sculptural, the jewellery designer Emma Field has been experimenting with the latest technologies over a couple of years, in order to create master pieces of jewellery that express ideas about order and chaos. Due to be held from 2nd to 19th of August, this solo exhibition will display her recent work, Rival States, where she will continue to discover the order that can be generated when different surfaces and lines intersect. It’s a must-visit event for ladies looking for some wearable object pieces.

Known to be the largest recreational marine event in the entire southern hemisphere, the Sydney International Boat Show starting 3rd of August will witness over 22 exhibitors over a couple of venues.  Ever since its inception in 1968, it has played home to over 3 million visitors who arrive to be inspired, educated and entertained by this fantastic pastime enjoyed by boating enthusiasts. There will be more than 145 boats on a purposely built marina, around 700 boats in the halls and other exhibits in the undercover hall space.

No trip to the city of Sydney can be complete without visiting the iconic Opera House, and the best thing to indulge in, is to witness a live opera night. On the 9th of August, the greatest tenor of long time, Jonas Kaufmann will be returning to Sydney Opera to perform one of the most challenging roles in opera in a rare performance of final opera by Wagner. The music will lead you into a mystifying world, with alarming notes of the prelude. Soothe your nerves, soak up the music and let something special happen to you!

Fancy the idea of watching Korean movies, while enjoying their food and culture? This Korean Film Festival down under will display the best of vibrant cinema rising from South Korea. This one-of-a-kind event promises to bring together people from different communities to come and participate in a unique Korean experience with cultural activities, gala receptions, industry forums and a lot more on offer.  Check out their website to get the list of this year’s line-up.

A traditional racing weekend (18-20th) awaits you at Blacktown, with edge of the seat thriller for the return of Virgin Australian Supercars Championship. Being home of motorsport, the venue has a perfect setting for an event ideally suited for family weekend getaway and motorsport enthusiasts. Kids below the age of 12 can get free entry with a paying adult. Get yourself a pair of binoculars to witness the action in close quarters, as you push a can of beer down your throat!

Proudly presented by the City of Canterbury, the Haldon Street Festival on the 19th of August will be an open invitation to over 25000 visitors, taking part in this annual event. People from all corners of the state will flock in numbers to indulge actively in culinary delights from across the planet, live performance across three pedestals, the vibrant street parade, numerous market stalls, free amusement rides and baby animal farm for the kids. Special care has been taken to make sure that everybody is entertained in equal measures and there is something for everyone to cheer about.

On the 20th of August, the Moore Park will turn into a colourful arena as a part of dream world tour, the Colour Run. Enter a world of fairy-floss clouds and real unicorns, as you dance through ruptures of appealing colours, party hard with great music and swim through the foamy clouds. On crossing the end line, you will enter the popular Finish Festival with a mystical celebration for one and all. Take part in the incredible colour throws, write down your dreams on the Dream wall and party with the Runicorn all along the way. It doesn’t matter who you are and what dreams you have; just be a part of this massive celebration in the city to paint your imaginations.

Commencing on the 23rd of August, the first ever Guitar festival in Sydney will celebrate the guitar culture and music, both national and abroad.  The event will include workshops, masterclasses and performances from leading musicians, inhabiting musical spaces across the city for 5 days. The extensive line-up includes the finest Australian classic guitar duo of Grigoryan Brothers, legendary Paco Pena, the American Jazz guitarist Sheryl Bailey, the local guitar genius James Norbert Ivanyi, US blues-rock virtuoso Richie Kotzen and many more. Energised by the love of guitar and its rich history, the Guitar festival is a contribution to the vibrant musical scenes of Sydney for coming generations.

Celebrating cultural differences with a primary focus on sustainability of environment, the Riverfest on the 26th of August is a melting pot of fun, ideas and creativity. The main objective of this event is to raise awareness of the cultural diversity and local environment of the city. Try exceptional gastronomic delights from across the world, be entertained with traditional dance performances and browse through a wide range of craft projects on display. There will be a number of stalls to learn about sustainable environment, and great prizes to be won for different activities.

The favourite artisanal Italian festival of Sydney will be back for its 5th consecutive year on the 27th of August, with an appeal of Italian food running from fresh-pasta finery for the connoisseur to the street-style pizza fun for the whole family. This is a virtual journey through Italy with more than 200 wines to taste and an opportunity to attend an Italian masterclass organised by top winemakers.  Taste your way all along the Italian market brimming with pizza, salami, pasta, cheese, pastries, fruits, bread, olive oil, coffee, gelato and a lot more. Relax in one of the wine gardens or sip glass of Italian Cocktail from Negroni Bar. 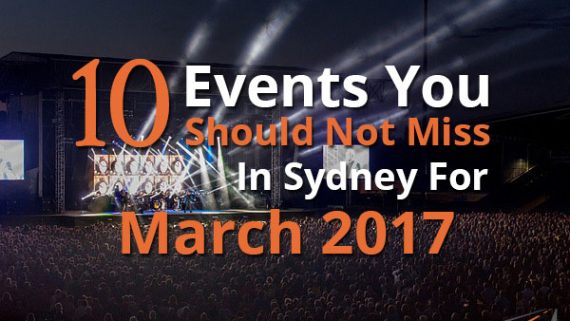 10 Events You Should Not Miss In Sydney For March 2017